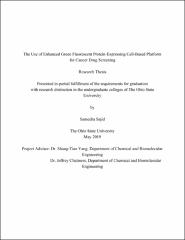 Green Fluorescent Protein from the jellyfish Aequorea victoria is a well-recognized marker for gene expression. During the course of this study, the plasmid containing the Enhanced Green Fluorescent Protein (EGFP) gene controlled by human cytomegalovirus (CMV) was amplified using Escherichia coli (E. coli) bacteria. The transfected bacteria were then plated onto an LB agar plate containing antibiotic and allowed to form colonies. Then a single colony of E.coli was picked, transferred to LB liquid medium and incubated overnight on a air shaker. After extraction, the plasmid was used to engineer human Lung cancer A549 cells that express EGFP controlled by the human cytomegalovirus promoter. A total of three attempts were made to transfect A549 cells using a lipid vector, Lipofectamine 2000.Each time, the fluorescence of transfected cells was detected using a fluorescence microscope. The results of the study helped establish several optimal parameters concerning successful transfection of A549 were established including the initial cell seeding density before addition of DNA and transfection vector, the ratio of DNA to Lipofectamine 2000, Geneticin concentration for selection of transfected cells, and the transfection efficiency when using linearized vs circular plasmids.