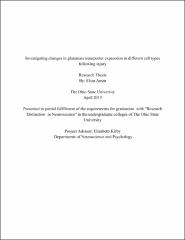 Glutamate is the most common neurotransmitter in the brain, but excessive activation of glutamate receptors results in neuronal dysfunction and death, a process called excitotoxicity. Excitatory amino acid transporter (EAAT) proteins are responsible for reuptake of glutamate from the synapse, thus keeping extracellular glutamate levels low and preventing injury. EAAT1/GLAST and EAAT2/GLT-1 are prevalent in the brain and primarily expressed in glial cells. Previous work by the Kirby lab and others demonstrates that neural stem and progenitor cells (NSPCs) in the adult hippocampus also express EAAT1 and EAAT2, though the function of EAATs in NSPCs is poorly understood. Given the important role of EAATs in protection from excitotoxic injury, we studied EAAT expression patterns in mice given kainic acid (KA), which causes excessive glutamate release and seizures. Previous work in the Kirby lab shows that EAAT1 and EAAT2 mRNA decline in the dentate gyrus (DG) subregion of the hippocampus beginning 1 day after KA injury. However, it is unknown which cell populations are driving this tissue-level change. In the present study, we used EAAT2-GFP and EAAT1-dsRed transcriptional reporter mice to examine EAAT2 and EAAT1 transcription in the DG after KA injury. We quantified the mean GFP fluorescence intensity (FI) in the whole dentate gyrus, a region occupied by EAAT2-expressing astrocytes and NSPCs, and found no difference between KA-injured mice and controls 1,3 and 7 day post-injection. Similarly, GFP FI in the subgranular zone, a region predominantly occupied by NSPCs, did not differ from controls. We also quantified GFAP% area to assess astrogliosis and found a trend towards increased GFAP% area, which did not reach significance (p = 0.149), 1 day after injury. This is consistent with previous results in wild-type mice demonstrating a non-significant trend toward astrogliosis 1 day post-injury and significant astrogliosis beginning 3 days after injury. The expression was similar in both EAAT1-dsRed and EAAT2-GFP mice 3 and 7 days after injury, timepoints previously found to coincide with astrogliosis. Future analysis will examine these cell specific changes in fluorescent reporter expression using a combination of protein marker expression, cell morphology, and anatomical location to identify astrocytes and neural stem cells. We expect these studies to increase our understanding of whether reduced EAAT expression following KA injury occurs globally or in specific cell populations.Our findings could help refine treatment strategies for brain disorders involving glutamate dysregulation.