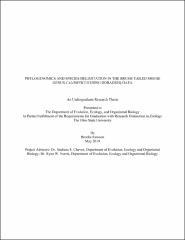 Brush-tailed mice of the genus Calomyscus have been found throughout the varying landscapes across Southwest Asia. Morphological similarity amongst species in conjunction with a lack of sufficient molecular data has led to much uncertainty about the taxonomic relationships among the individual species within the genus. The number of species as well as their evolutionary relationships are not well defined. The objective of this study was to use genome-wide molecular data to discern the historical evolutionary associations of several semi-isolated Calomyscus populations located in Pakistan and Southern Iran. We found that there is statistical support for the presence of four distinct species within this region, though the cutoffs for each species remain somewhat ambiguous. Analyses from several bioinformatic programs supported the existence of two genetically distinguishable groups within the presently recognized C. baluchi species. The current division between C. hotsoni, C. cf. bailwardi, and C. baluchi was also well supported. The varying elevation and drastic fluctuations in geographic landscapes spanning across the region provide a possible driving force for the divergence and diversification of these populations.