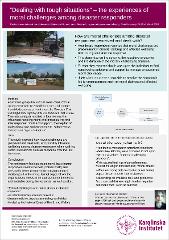 For healthcare personnel involved in disaster response, moral challenges are present that can lead to consequences such as moral distress and affected wellbeing. This study explored the experience among disaster responders of perceiving and dealing with moral challenges when working within international disaster response over the last five years. Focus group discussions were conducted in spring 2018 with 12 Swedish nurses and doctors from Medécins sans Frontiéres, the Swedish Civil Contingencies Agency and the Swedish Red Cross. Thematic analysis resulted in four themes that influenced handling moral challenges, described as "tough situations" and how that affected responders' wellbeing during and after the response: "tools and support", "perception of professional role and engagement", "other stress factors" and "type of situation". These were interlinked and all affected how the tough situations were dealt with, during and after the response. Moral challenges were described as predominant when working in disaster settings and affected wellbeing both during and after the response, depending on the severity, repetitive encounter and the duration of the morally challenging situation. The study found that responders had to be creative and constructive in resolving and finding own support in the situations, since formal support often was either lacking or not appropriate. The preliminary findings recommend that disaster responders need to be both professionally and personally better prepared for managing moral challenges. Furthermore, formal support from the organizations needs to be appropriate to the needs and available during the response, as well as after.