Measurement and Manipulation of Defects in Gallium Oxide 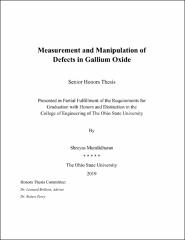 Gallium Oxide(Ga2O3) is a material of wide interest in power devices due to its widebandgap. Work has been previously done regarding the nature of defects present in the lattice. Defects present in the lattice present problems due to the obstruction of charge transfer through the material, which is essential for the operation of devices such as transistors. The objective of this project was to determine the concentration of defects present in the material and determine the effectiveness of various treatment methods.Depth Resolved Cathdolouminescence(DRCLS) was used to identify defect levels and their approximate intensities. Surface Photovoltage Spectroscopy(SPS) and transient SPS was used to quantify and characterize the number of defects present in a given sample. Treatment methods such as remote oxygen plasma (ROP), neutron irradiation, and annealing in nitrogen served to reduce the concentration of defects in the material. DRCLS showed the marked decrease of oxygen vacancies in Gallium Oxide with the use of ROP. This was also confirmed with the use of transient SPS. Neutron Irradiation was shown to increase the defect densities of Gallium Vacancies, and this allowed the full characterization of the defects present in bulk Gallium Oxide. Transient SPS confirmed these trends, and defect density concentrations were found for each defect peak. Control and characterization of the defects present in Gallium Oxide was performed using experimental techniques and material treatments. Defect density numbers were found using transient SPS and trends were confirmed with DRCLS. The results from this allow the development and creation of new processes in this material, to make usable and effective electronic devices