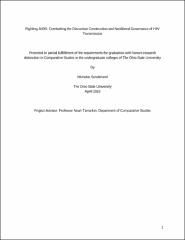 Today, an estimated 36.7 million people are living with HIV, a shocking number less than 40 years after the epidemic began. A more shocking statistic reveals that over 50% of the entirety of people living with HIV reside in East and Southern Africa, a region home to only 6.2% of the world’s population. Luckily, these concerning statistics have attracted the attention of international NGOs and national government prevention campaigns, to try and stop the dizzying rates of infection. The United Nation’s AIDS foundation has even pronounced ending HIV/AIDS as a public health threat by 2030 as part of their Sustainable Development Goals, a set of 15 goals the UN has established to save the world. The dominant discourse among these organizations, like the UN and the World Health Organization, frames the disease as a result of individual behavior, and therefore advocates for things like condom use and awareness about the disease as the most powerful tools to stop the epidemic, which they conclude will come to fruition through economic development. Although awareness and safe sex are important, these policies fail to consider the implications larger structural problems in the region, such as extreme inequality and entrenched labor migration, have on perpetuating the disease. This is evident as States and NGOs have spent billions of dollars diffusing condom promotion programs and behavior change interventions, but little to no progress has been made in reducing rates of infection according to decades of data. Current day prevention methods that stress individuals as the root of the epidemic, and do not center the problems of the political economy under which HIV transmission occurs, are unsuccessful. This thesis argues that HIV is a disease of the political economy of Sub-Saharan Africa, rather than individual pathologies. This thesis traces the effects the legacies of colonialism and economic development portfolios have on creating entrenched labor migration and extreme inequality in the region, resulting in HIV existing as a disease that is outside the control of its victims, and instead is perpetuated by specific economic and political structures in Sub-Saharan Africa. By revealing the disease to be a symptom of neoliberal economic policy and racist discourses, this thesis urges current HIV activists in Southern Africa to politicize the epidemic, by including studies on gender violence, migrant worker’s experience, and the demise of rural agriculture to illustrate the structural problems perpetuating HIV. While prior work in the field has acknowledged half-heartedly that poverty and gender inequality perpetuate HIV transmission, this thesis criticizes current scholarship that focuses on sociocultural aspects of HIV transmission. Current scholarship on HIV transmission and prevention centers the problem on the victims of HIV, and largely paints the disease as a consequence of African culture and ignorance among Africans. Instead of placing the blame on the epidemic’s vulnerable victims, this thesis argues that current large-scale prevention efforts fundamentally misperceive the key vehicles continuing the disease.