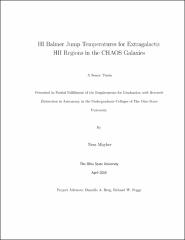 By understanding the observed proportions of the elements found across galaxies astronomers can learn about the evolution of life and the universe. Historically, there have been consistent discrepancies found between the two main methods used to measure gas-phase elemental abundances: collisionally-excited lines and optical recombination lines in HII regions (ionized nebulae around young star-forming regions). The origin of the discrepancy is thought to hinge primarily on the strong temperature dependence of the collisionally-excited emission lines of metal ions, principally Oxygen, Nitrogen, and Sulfur. This problem is exacerbated by the difficulty of measuring ionic temperatures from these species. In this work I am exploring an alternative method of estimating nebular temperatures - the HI Balmer recombination continuum jump. Balmer jump temperatures measure the average electron temperature for the entire HII region, rather than only measuring the temperature in the part of the nebula where a particular metal ion is primarily found. Here I present robust measurements of the Balmer jump electron temperature using the best spectra obtained from the CHemical Abundances of Spirals (CHAOS) project. CHAOS has measured elemental abundances in 274 HII regions in 4 spiral galaxies using the Large Binocular Telescope. In this work, I present Balmer temperature measurements in 58 of the CHAOS HII regions and show how they correlate with different ionic temperatures from the same nebulae. In particular, the Balmer temperature correlates best with the ionic temperature derived from the SIII emission lines. Determining the best nebular temperature measurement in HII regions has important implications for resolving the abundance discrepancy problem and thus properly calibrating empirical diagnostics of elemental abundances derived from bright collisionally-excited emission lines.