All the World’s a Stage: The Power of Representing and Re-Contextualizing Authoritarian Violence in Griselda Gambaro’s Information for Foreigners 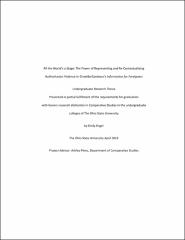 For my undergraduate honors thesis project, I plan to examine the ways in which Griselda Gambaro's 1971 play Information for Foreigners, through its mimetic devices, evokes confusion, fear, trauma, etc. in the viewer to effectively mimic the embodied experience of state sanctioned violence. I plan to conduct a discursive analysis of the work, picking apart the literary devices it utilizes, as well as perform an investigation of secondary sources, in order to place the play within the broader context of Latin American studies and Argentine history. Given the periodic context of the work as one of the first pieces to address the Argentine dirty war released before the 1976 coup d'etat, the significance of Information for Foreigners within the history of Latin American studies and world literature is quite clear. However, given the extremely recent rise of fascism worldwide, the meltdown of the Argentine economy, and the tremendous increase in popularity of translated literature, my inquiry will seek to extend the implications of the play as a work which continues to be palatable in examining issues which arise in both comparative literature and Latin American studies today.