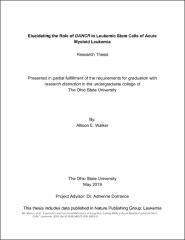 Acute Myeloid Leukemia (AML) is a malignant disease associated with poor outcomes. One of the major clinical challenges is suffering relapse after achieving a complete remission. Leukemic Stem Cells (LSC) persist in the minimal residual disease cell populations and cause AML relapse because they are assumed to be more resistant to standard chemotherapy. Therefore, these cells must be specifically targeted in AML patients. Long non-coding RNAs (lncRNA) are distinguished by having more than 200 nucleotides and regulate cellular function. Their role in LSCs is yet to be determined. We analyzed 377 AML patients for levels of expression of various lncRNAs. Gene expression signatures (GES) from AML LSC populations have been defined and expression of a ‘core enriched’ (CE) GES, representing 44 genes deregulated in LSCs, is correlated with lower survival rates. We studied associations between the CE-GES and lncRNA expression profiles and identified 161 lncRNAs that were found to be deregulated in the AML patients. Of these, 152 lncRNAs were found to be higher expressed in high CE than low CE patients, indicating that they present in AML patient’s gene expression profiles that have more characteristics of stem cells. Among these lncRNAs, DANCR was found in patients with high CE score. To examine effects of DANCR in LSCs, we performed a long-term culture initiating cell (LTC-IC) assay which quantified the frequency of stem cells in a given population. Cells were treated with transferrin-conjugated anionic lipopolyplex nanoparticle (transferin-NP-siDANCR or transferin-NP-siSCR controls) which work as a delivery method for treatment. We found significantly fewer amount of stem cells were present in the DANCR knockdown population compared to scramble controls. Next, Real Time PCR (qRT-PCR) was performed to compare DANCR expression in AML patients’ bone marrow to healthy bone marrow. The amount of DANCR expression varied between patients but was significantly elevated compared to the control bone marrow (p<0.01). Specifically, in LSC enriched populations (n=4), DANCR expression was significantly higher within individual patients (n=4). To determine the role of DANCR in LSC self-renewal, a colony forming unit (CFU) was performed with DANCR knockdown in CD34+ AML patients (n=3). Nanoparticle was used in CD34+ enriched AML cells to perform the CFU. After replating, we found significantly fewer colonies in DANCR knockdown cells when compared to a scramble control (p=0.03, average decrease: 38.9%). A celltrace violet (CTV) assay was performed to assess quiescence of primary AML blast cells after DANCR knockdown. A significant decrease in the number of quiescent (i.e. CTV max/CD34+) cells were found in the DANCR knockdown group compared to scramble controls (p<0.05). Finally, in vivo experiments were performed by conditioning mice with radiation followed by treatment of Tf-NP-anti-DANCR. This caused a significant decrease in engraftment of mice compared to scramble control (p<0.001). Our data show that the lncRNA, DANCR, is overexpressed in LSCs. Our experiments suggest that DANCR may play a functional role in AML.