ANALYSIS OF INTRA-CHROMOSOMAL DELETIONS IN YEAST 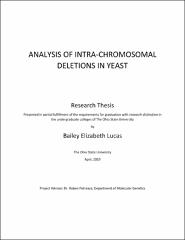 ABSTRACT Deoxyribose Nucleic Acid (DNA) Double Strand Breaks (DSBs) are the most dangerous form of chromosome damage because they result in a severed chromosome. If the chromosome doesn’t properly repair itself it could lead to major chromosomal abnormalities such as deletions, translocations, inversions, duplications and other kinds of copy number variations; all characteristics of cancer. An accurate DNA damage response pathway is imperative for repair of DNA double strand breaks. Repair may occur by homologous recombination of which many different sub-pathways have been identified. Some pathways are conservative meaning that the chromosome sequences are preserved, and others are non-conservative leading to some alteration of DNA sequence. The project focused on designing an in vivo genetic assay to study non-conservative intra-chromosomal deletions at regions of non-tandem direct repeats in Schizosaccharomyces pombe. This assay can be used to study both spontaneous breaks arising during DNA replication and induced double strand breaks created with the S. cerevisiae HO homothallic endonuclease. Preliminary genetic characterization of this assay shows that spontaneous breaks require rad52+ but not rad51+ while induced breaks require both genes. This suggests that the two types of breaks have distinct genetic requirements. This assay will be useful in the field of DNA damage repair for studying mechanisms off intra-chromosomal deletions. This assay was used to study the function of two chromatin remodeling genes: Mst1 (human TIP60) and Skb1 (human PRMT5). Mst1 is a histone acetyltransferase which functions to remove histones form the DNA double strand break and Skb1 is its regulator. It was revealed that both Mst1 and Skb1 promote conservative repair of DNA double strand breaks.