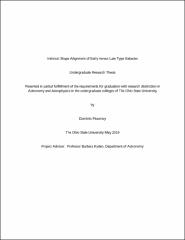 When looking at pairs of neighboring galaxies, a correlation between the alignment of the pair and their physical separation can be made. In studying this we can better understand the ways in which early and late type galaxies align themselves in the universe. Studying these pairs of closely separated galaxies allows us to make inferences on how neighboring galaxies affect each other’s formation and evolution. I use 400,000 galaxies from the Sloan Digital Sky Survey (SDSS) to compare the alignment correlation function for galaxies of early and late type. Galaxies are classified as “early” if they are centrally concentrated, contain a red stellar population, and show no evidence for recent star formation. By contrast, galaxies are “late” if they are less concentrated, contain blue stars, and show spectral emission characteristic of star forming regions. The trend among galaxies is a parallel alignment until they reach a separation of 20 kiloparsecs (kpc), in which they have a perpendicular alignment after. This alignment lasts until the galaxies are separated by over 100 kpc and thereafter lose their alignment correlation. This is seen in some classifications of early type galaxies but has stronger support in all classifications of late type. These findings show there is an intrinsic alignment function for early and late type galaxies in which there is a stronger alignment for late type, meaning there is a different evolutionary formation that exists between the two types.