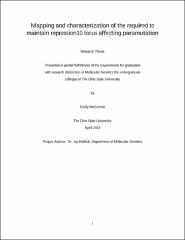 Paramutation describes a poorly understood biological process in which one allele of a gene causes heritable changes to the corresponding allele. Such changes seen at multiple loci in diverse organisms lead to inheritance patterns that appear to defy the first law of Mendelian genetics. The underlying molecular mechanism responsible for paramutation is best understood in corn (Zea mays) where paramutation occurring at the Pl1-Rhoades (Pl1-Rh) allele of the purple plant1 (pl1) locus causes meiotically heritable changes in gene regulation. Plants with an unrepressed Pl1-Rh allele exhibit dark purple coloration, while plants with a repressed paramutant derivative (denoted Plˈ) lack such coloration. The suppression of Pl1-Rh can be attributed to functions encoded by required to maintain repression (rmr) genes. Five different rmr genes identified by mutations have been previously reported. Identifying all the individual rmr gene products is critical to understanding the molecular mechanism responsible for the paramutation process. Having determined that two mutations define a novel rmr locus designated rmr10, I aimed to characterize the function and identify the molecular nature of this gene. I first compared Pl1-Rh mRNA levels between mutant and non-mutant siblings and between reference Pl-Rh and Plˈ plants to test the hypothesis that the rmr10 locus affects RNA abundance. To identify the molecule encoded by the rmr10 locus, with the help of collaborators, I mapped the position of the rmr10 locus in the genome and then used a candidate gene approach to evaluate possible gene models using an open-source bioinformatics pipeline. Likely gene candidates were selected based on relevance to the biological processes of DNA/histone modifications or small RNA production.