Influence of Substrate on Behavior of a Cichlid Fish 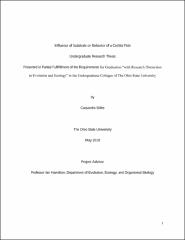 The purpose of this experiment is to determine how substrate type influences behavior in a group-living cichlid fish (Neolamprologus pulcher). Preliminary observations suggest a decrease in reproductive success of lab-reared fish living in tanks with darker substrate. I hypothesize that substrate type influences behaviors involved in reproduction, such as mating displays and maintenance of breeding shelters. Therefore, I predicted that fish in tanks with light colored substrate would exhibit higher frequencies of such behaviors as compared to tanks with darker substrate. To test this, I established 10 groups of three fish each. The substrate in five of the tanks was light-colored substrate; substrate was dark in the other five. Over a period of 10 weeks, two rounds of 15 min behavioral observations were conducted per tank each week using the event-recorder software, Boris. I examined investment in breeding shelter maintenance by filling these with sand and measuring the rate at which fish removed sand over a 4-week time period. Generalized Linear Mixed Models (GzLMM) were used to test the effects of treatment and actor, and the interaction between these, on social behaviors and interactions with substrate. This study will contribute to understanding the relationship between habitat composition and behavior in fish.