"Shall I project a world?" Projections, Power, and Blindness in Thomas Pynchon's The Crying of Lot 49 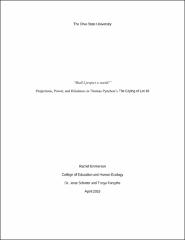 In his novel, The Crying of Lot 49, Thomas Pynchon creates a world for female protagonist Oedipa Maas to journey through in order to execute the will of her ex-lover, Pierce Inverarity. Many aspects of this world are fictional – for example, characters with comical, punny names like Emory Bortz; a conspiracy surrounding the mail system thanks to a group called the Tristero, whose existence is still questionable by the novel’s end; and the city of San Narciso, whose name draws inspiration from Greek mythology’s Narcissus. Yet, the use of maps to find not only one’s physical location, but also to find one’s identity is grounded in the reality of daily life. However, just like her namesake – Sophocles’ Oedipus from Oedipus Rex – Oedipa is figuratively blind to the maps that are projected around her, which leaves her at a loss of location and self-identification. This begs the question: if Pynchon creates this world, including these projections, for Oedipa, why would he then make her blind to them? This thesis concludes that Oedipa only serves as a passive spectator (of what she can see) to Pynchon’s active projections. Despite certain points in the novel where she rises to a more active role and grasps at empowerment – for example, posing the question, “Shall I project a world?” in order to assume the role of projector instead of Pynchon – Oedipa still ends up in the same place she started; even though she tries to escape Pynchon’s control, she cannot. Therefore, in keeping Oedipa blind, passive, and powerless, Pynchon not only exerts his power over her, but abuses it, demonstrating the impossibility of a blind victim’s escape from the harsh cycle of an abusive relationship.

This thesis was chosen among 200 undergraduates to be presented (in poster format) during the 24th Annual Richard J. and Martha D. Denman Undergraduate Research Forum.