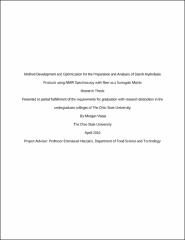 A basic benchtop method was tested for the emulation of enzymatic starch hydrolysis, the principle process that occurs in brewing beer that determines the production of fermentable and non-fermentable sugars. Several signals belonging to hydrolysis products appear in the 1H NMR spectrum, indicating that NMR has the potential to become an efficient tool for quantification and kinetics studies for starch hydrolysis. In addition, various beer samples were analyzed using 1H NMR spectroscopy with the purpose of discrimination of beer varieties under the classification of top and bottom fermentation. Special attention was given to the spectral regions of δ 3.4-4.0 and δ 4.5-5.4 ppm, which correspond with the carbohydrate composition of the substrate. A modified pulse sequence based on the standard 1D noesy experiment with presaturation and shaped pulses was used to achieve the simultaneous suppression of the three signals belong to water and ethanol. Although compositional variations were reflected on the 1H NMR spectra obtained by the analysis of different samples of beer, as of yet we have been unable to differentiate beers based upon the class identity of top or bottom fermenting yeast utilization. These results indicate that other factors may also play an important role on beer composition and/or a larger set of samples is required before drawing final conclusions.