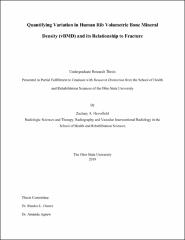 The human body is full of structural variation, especially in the skeletal architecture of different bones. This variation is dependent on the mechanical environment of the bone and its physiological purpose, which impacts its material and geometric properties. The relationship between these properties has been investigated in previous studies, which were largely focused on the structural and material variation of human long bones (femur, radius, tibia, etc.). It is still unknown if the variation of certain material and geometric properties found in the long bones are the same in the axial skeleton. As rib fractures are a main cause of fatality in drivers in motor vehicle crashes, it is essential to understand the multivariate factors that relate to bone quality and rib fracture risk. The purpose of this study is to investigate variation in volumetric bone mineral density (vBMD) along the length of the rib, cortical section modulus at the site of fracture (Z), and their relationship to structural properties to better understand differential fracture risk. In total, forty-six ex vivo mid-level ribs (5th-7th) were obtained from n=46 post mortem human subjects (PMHS) with ages ranging from 13-83 years. The 46 PMHS were divided into two different sub-samples, the age-matched sample and the physically tested sample, which was dependent on if the rib had been dynamically tested. Each rib was scanned using a 64 slice Philips Ingenuity Computed Tomography scanner (CT) at a consistent in-plane resolution of 0.167mm. Each rib was then dynamically tested in a 2-D bending scenario to simulate anterior-posterior thoracic impact. To investigate variation along the length of the rib, Phillips Intellispace, Dataviewer, and Skyscan CTAn software (Bruker) were used to calculate a vBMD value for volumes of interest (VOIs) located at the 30%, 50%, and 75% of total rib curve length (Cv.Le), the age-matched sample (n=44), as well as the location of fracture for the physically tested sample of the ribs (n=30). Z was collected from histological cross-sections taken from the site of fracture after dynamic testing. Finally, the sub-sample’s vBMD and Z were used to determine and calculate the Stress Strain Index (SSI) of the ribs. All data collected were normally distributed (p>0.15). One-way ANOVA demonstrated significantly different vBMD at all of the sites, 30% and the 50% sites (p<0.01), 50% and the 75% sites (p<0.01), and the 30% to the 75% site (p<0.01). The 30%, 50%, and the 75% sites were statistically tested against structural properties related to the rib, Linear Structural Stiffness (K), Total Energy (UTOT), and Peak Force (FPEAK). Using a linear regression, the 50% and 75% sites showed no significant predictability with any of these factors (p>0.05) as well as the first fracture site vBMD. The 30% site demonstrated no significant predictability between K or UTOT (p>0.05) but did demonstrate statistical significance when compared to FPEAK (p<0.05). When combining the fracture site vBMD with the fracture site Z, we were able to produce a multivariate factor, SSI. When compared to the structural properties, SSI was able to significantly predict UTOT, FPEAK, and K explaining large amounts of variation within the sample (p<0.001). However, Z alone explained slightly more variation within the sample than SSI could, excluding UTOT (p<0.0001). Quantifying vBMD along the length of the rib shows significant variation and is an essential part of understanding and predicting rib fracture risk. Likely, generalized scores are not enough to quantify and determine whole bone quality. Utilizing multifactor variables may prove useful in future analysis of bone quality assessment.