Recognizing the Chinese Marriage Trade as a Gray Market 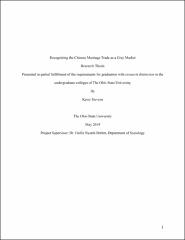 China’s 1980 One Child Policy and the recent migration of women from rural to urban areas has left rural regions of China with a large gender imbalance and a deficit of women to be wives. In result, a marriage trade in Northern China was developed by 3rd party brokers to supply the numerous Chinese bachelors with North Korean wives. Since the North Korean famine of the mid 1990s, these women have been increasingly defecting to China. This emerging gray market assuages the demands of traditional Chinese culture as well as China’s growing commercial sex industry. Some of these women willfully chose to be sold into marriage, and others were trafficked through methods of coercion and deception. My research introduces and emphasizes the power and ability that gray markets have on the current and future derailment of Chinese society by examining how various governments and organizations frame this issue. For example, do they label it as human trafficking, as a gray market or as a legal action? I analyze open access sources from the United States and Chinese governments, the United Nations, five non-governmental organizations focused on the protection of human rights, three faith-based organizations, and one humanitarian organization. I find that the majority of these organizations minimize the North Korean female voices in comparison to the praise they give to their financial support, their employees, and if applicable, their faith. The United States, the United Nations and western organizations generally frame this marriage trade as human trafficking. Motivation aside, the minimization of these women’s voices, the heavy influence of Western opinion, money and China’s heavy censorship, make it difficult to recognize the gray areas of this situation. Furthermore these women are often only depicted as victims to be “saved,” allowing the trade’s dual functionality to be less acknowledged. This trade not only supplies Chinese men with wives but can also be a self-chosen option of survival for these women, which is why the trade has a dual functionality. The Chinese Marriage Trade is a gray market and its negative impact should not be ignored. Many nations are vulnerable to gray markets like this and it is imperative that we begin to recognize and target them.