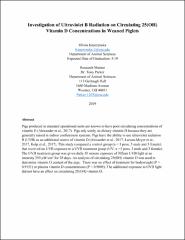 Pigs produced in standard operational units are known to have poor circulating concentrations of vitamin D (Alexander et al., 2017). Pigs rely solely on dietary vitamin D because they are generally raised in indoor confinement systems. Pigs have the ability to use ultraviolet radiation B (UVB) as an additional source of vitamin D (Alexander et al., 2017, Larson-Meyer et al., 2017, Kolp et al., 2017). This study compared a control group (n = 3 pens, 3 male and 3 female) that received no UVB exposure to a UVB treatment group (UV; n =3 pens, 3 male and 3 female). The UVB treatment group was given daily 10 minute exposure of 302nm UVB light at an intensity 250 μW/cm2 for 28 days. An analysis of circulating 25(OH) vitamin D was used to determine vitamin D content of the pigs. There was no effect of treatment for bodyweight (P = 0.9151) or plasma vitamin D concentrations (P = 0.9008). The additional exposure to UVB light did not have an effect on circulating 25(OH) vitamin D.