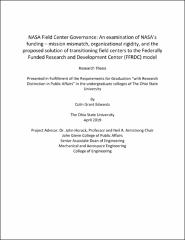 This paper seeks to identify the budgetary and structural changes in the Agency and changes in the political environment that highlight the development of a misalignment between these variables and the Agency’s current mission and purpose. NASA’s missions and strategic goals have expanded since the Apollo era. However, its budget has substantially decreased in real dollars and as a percent of federal expenditures. The alignment of presidential and congressional vision is also largely diminished. Finally, the Agency’s infrastructure and organizational structure remain essentially the same as it was 50 years ago. Highlighting this disconnect will proceed through an examination of 1) the Agency’s budget decline; 2) historical changes in its organizational model, highlighting the rigidity of NASA’s management structure; 3) a discussion of the changes in political discourse concerning the Agency and the competing priorities of political parties and branches of government; and 4) an analysis of NASA stakeholders’ values and objectives, and each group’s power to and interest in determining NASA’s organizational structure. This paper will then explore one of many potential solutions to some of NASA’s problems that periodically crops up in executive-level discussions of NASA’s performance; transitioning NASA field centers to a Federally Funded Research and Development Center (FFRDC) model. This exploration will begin by defining, providing the history and genesis of, and the legal basis for FFRDCs. Following, is an examination of variations in the FFRDC model, possible variations of implementation, an analysis of the advantages and disadvantages of converting field centers to FFRDCs, and an examination of the barriers to implementation. A summary and final recommendation will then be provided based on this comprehensive analysis.