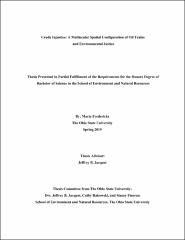 The increase of Bakken oil extraction and production in the United States in the last decade has sparked the expansion of crude-by-rail (CBR) transport. The accelerating need for CBR transport has not come without consequence, however, leaving derailments, oil spills, fires and explosions in the wake of its path. Public attention turned to CBR transport safety when an oil train derailment in Lac-Megantic, Quebec resulted in massive explosions and fatalities. This case made it clear that people who live in the blast zone, or in a 1-mile radius proximity to oil-carrying railway, disproportionately face the risks associated with CBR transport. Environmental justice (EJ) studies tell us that environmental harms are often felt unevenly where they are present, deeming people of color and impoverished people subject to making sacrifices for a supposed greater good. While most cases in EJ studies deal with fixed environmental threats, this study seeks to find nuance in the scalar theoretical underpinnings of EJ by zooming in and out on this mobile source of harm. By mapping and measuring oil train routes and demographic data in the city of Columbus, Ohio, this research begins on the local level of concentrated risk. The results show that impoverished people face disproportionate CBR risks in Columbus, an urban spaces linked to a national rail network within a global economy. However, just as an oil train moves between and beyond spaces of fixed threat, this research challenges single-scale perspectives of EJ, moving the framework from the local scale to the multiscalar.