The Rise of a New Anti-Feminism: Spokeswomen of the Alt-Right and their Appeals to Women 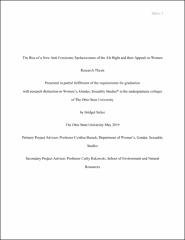