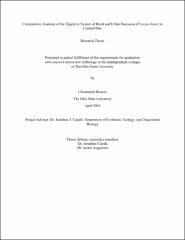 Since the industrial revolution, urban landscapes are ever expanding. This urbanization impacts the surrounding flora and fauna. As the landscape changes, the ecology changes with it. Animals must acclimate to new restrictions and novel diets. Some animals are adept at exploiting these resources and others are forced to colonize adjacent habitat. Raccoons (Procyon lotor) are an iconic urban dwelling animal. This adaptive creature inhabits most of North America and occupies every level of urbanization from forested areas to city centers. It feeds on a variety of foods from seeds and nuts to small mammals. A raccoon’s wide diet is critical for its successful acclimation to many environments. Remarkably, very little research has been done on the digestive system of this animal. I will be the first to document the macro-anatomy of the gastrointestinal (GI) tract, and to consider its implications for adaptation to environment. The GI tract starts with teeth that were examined for changes in omnivory using the fourth premolar and the first molar sheering and crushing ratios. I found little evidence of change across ecologies indicating physical changes. The hollow organs, of the stomach, small intestine, and large intestine were analyzed for significant differences in surface area to volume ratio and for length and weight differences. These aspects of the GI varied widely across ecologies and individuals indicating that the general size and shape does not change based on diet. Of the hollow organs the esophagus differed in normalized circumference across environments and suggests gorging capabilities may differ between ecologies. The solid organs of digestion, liver (with gallbladder), greater omentum and the pancreas were normalized and evaluated for weight similarly to the hollow organs. The evaluation of the relative size of these organs did not differ between habitats. It is difficult to say with confidence that there is a significant difference in the gut morphology between rural and urban raccoons. This study provides an in-depth investigation of the gut ii anatomy of Procyon lotor and a fundamental basis for exploring the effects of human expansion on indigenous fauna. The future holds more studies, with increased specimen numbers including histology and DNA profiles.