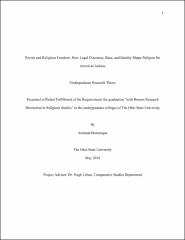 The American legal context of religious freedom is an area marked by turmoil. Religious groups must seek explicit protection, boxing in their identity to fit the American legal mold of what religion is. American Indians have faced a long battle for religious recognition and protection. This paper looks at the Native American Church (NAC) and the federal peyote exemption that legalized peyote for use in religious ceremonies by American Indians. Since the creation of the exemption, there have been several cases brought forth by white Americans seeking the right to practice peyote religion. This project seeks to identify why the peyote exemption remains ethnically restricted despite claims of racial discrimination under the Equal Protection Clause. The legal discourse of religious freedom is paramount in the peyote debate, promoting a protestant understanding of religion and emphasizing the political identity of American Indians as members of semi-autonomous entities.