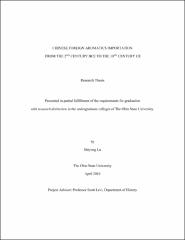 This paper aims to show that foreign aromatics were important commodities in Chinese foreign trade, and the size of importation keeps growing. The paper intends to research on the development of Chinese foreign aromatics importation from the second century BCE to the tenth century CE, which was greatly influenced by imperial governments’ policies and the spread of Buddhism. The research is based on recent archaeological evidence, an enlarged selection of Chinese texts and some Indian, Arabian and Greek texts. The research also uses knowledge of aromatics from Chinese traditional incense making, which helps to better explain ancient Chinese accounts of foreign aromatics, and corrects mistakes made by modern scholars. The paper is divided into two parts. The first part is an overall survey of Chinese aromatic importation and usage during this period, including trading routes, nations, merchants, etc. The second part is a detailed description of major aromatics imported to China that includes an analysis of the names of aromatics, their regions of origin, how they were brought to China, their usage and influences to Chinese society.