Optimization of a Hexapedal Robot for Legged Locomotion 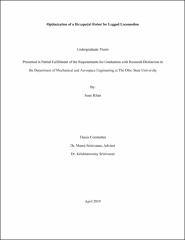 Humans have a great ability to self-optimize their movements and adapt to various conditions. This is related to human’s ability to optimize their motor actions to increase energy efficiency and improve stability and robustness of performance. An example of this can be seen in walking. When humans are walking and arrive at a different surface condition, ice for example, they are able to quickly adapt and optimize an efficient way to move across the ice. This adaptation includes changes in the walking styles, extension of arms for increased balance, as well as a reduce in speed to maintain balance. Current robots lack such quick adaptive ability as many robots are hard coded for particular scenarios in locomotion. In this thesis, our objective is to explore adaptation and optimization in robots in a simplified setting. We use an open source hexapedal robot, miniRHeX. We examined how walking speed performance depended on a few parameters of the leg motion controllers, specifically by sweeping through an acceptable range of each parameter; we considered parameters such as the relative phase between the legs, the PD gains of the proportional and derivative gains, and the walking period. We then implemented a constant step size version of gradient descent optimization and found substantial improvement in walking speed in just 2-3 iterations. The methods show promise, but suggest implementing a line search, or perhaps using coordinate descent to be robust to trial-to-trial variability in measured performance.