Learning to Stand with a Simulated Prosthesis 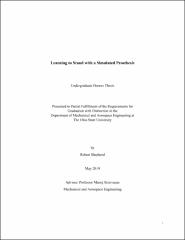 Learning to stand and balance is one of the most important processes that human children go through as they become independent competent movers. However, the process that humans use to learn to stand stably has not been studied in sufficient detail. Certain amputees, stroke victims, and other people with movement disorders may need to re-learn how to stand. Understanding this re-learning process better may help design better rehabilitation procedures for such populations. Here, we study such re-learning process by using a simulated prosthesis, which can be used with healthy adults to cause a similar learning process. The purpose of this research is to collect data on how people learn to stand and balance with a simulated prosthesis and then mathematically model the process of learning to be more stable. First, data is collected on healthy human subjects standing from sitting and performing quiet standing using a Vicon 3D motion capture system and a force plate. The subjects are then outfitted with a simulated prosthesis called the iWalk 2.0 and again stand from sitting and perform quiet standing and the data will be recorded. This data is then analyzed in MATLAB to create a mathematical model of the learning process. Specifically, we first determine how humans modulate their leg forces to control their body state. Then, we characterize the re-learning process by observing how the feedback gains in this “standing controller” change as the subjects become more experiences with the simulated prosthesis. All subjects participated with informed consent and the experimental protocol approved by the Ohio State IRB. Current results point to the subjects initially not loading the prosthesis and gradually loading the prosthesis. The subjects had more force variability (standard deviation) initially, suggesting that they initially required a lot of control; their later force variability was lower, suggesting a more stable and learned steady state. Further work will be needed to model the learning process, but the results point to the subjects becoming more stable and learning how to balance with the prosthesis over the course of the trial. Amputee and stroke victims need assistance relearning to stand, and by understanding the learning process we can provide insight into this.