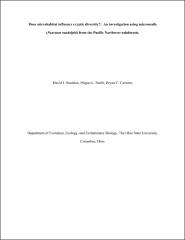 The Pacific Northwest temperate rainforests are biodiversity hotspots with a dramatic geological history, with many species endemic to forests in the Cascades mountains. The Pleistocene glacial cycles drastically impacted the ranges of these endemics, with the much of the Northern Cascades mountain range being covered by alpine ice. Previous work suggests that many species survived the Pleistocene in small isolated refugia throughout the Pleistocene glaciation. Here, we investigate whether the microsnail Punctum randolphi was able to survive in the Northern Cascades throughout the Pleistocene by living in refugia and expand into its current range after the last glacial maximum. We also investigate whether P. randolphi harbors cryptic diversity due to divergence in these isolated refugia. Results from gene tree inference, multimodel inference and niche modeling suggest that P. randolphi was able to survive throughout Pleistocene glaciation in a single isolated refugium before expanding its range after the last glacial maximum.