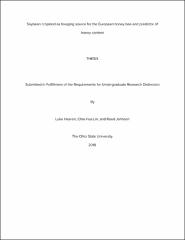 Soybean (Glycine max) farming contributes a large portion of Ohio’s annual crop revenue and accounts for a similarly large portion of Ohio’s cropland. Though G. max is self-pollinated, and thus not dependent on insect pollinators, it has been found that insect pollinators will visit G. max flowers nonetheless, and in doing so cause an increase in soybean yield. Conventionally, soybean has not been considered a major source of nectar for the summertime foraging of honey bees (Apis mellifera). Over the last decade, it has become increasingly obvious that, to an uncertain degree, G. max bloom does contribute to honey production. We seek to determine the the extent to which G. max contributes to honey in Ohio. Samples of honey from hives across the state were collected from participating beekeepers. The pollen grains were extracted from each sample, counted via light microscopy, and classified into their respective taxa. A nearly-pure soybean honey was created to determine quantity of G. max pollen grains per gram. The ratio was found to be 7,007 grains of soybean pollen per gram of soybean honey. This ratio was then applied to the G. max pollen count of each honey sample to infer what proportion by mass of that honey is derived from soybean. Geographic information system (GIS) analysis was used to determine the presence of soybean cropland within foraging range of the hives at the time samples were taken. A high proportion (70%) of samples were derived in part from soybean, most of these at less than 5% by mass. Nine samples, however, are comprised of 10% or greater soybean honey by mass, the greatest of which being 44% soybean honey. When correlated with the presence of soybean as determined in GIS analysis, a weak positive relationship may be established between soybean presence and soybean composition of honeys. The implications of foraging on G. max by honey bees are twofold: to the crop grower and to the beekeeper. A clearer understanding of soybean pollination will allow farmers to make more informed choices about how and when to apply pesticides and allow beekeepers to position their hives to best maximize productivity and avoid potentially injurious pesticides.