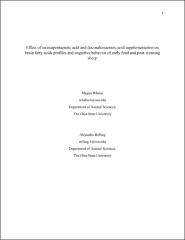 Omega-3 (n-3) polyunsaturated fatty acids (PUFAs) have been supplemented during late fetal development for the improvement of mammal cognitive abilities. However, little is known about the effects of n-3 PUFA supplementation in sheep during early fetal development and postnatally. The objectives of this study were to investigate the effect of docosahexaenoic acid (DHA) and eicosapentaenoic acid (EPA) supplementation on fatty acid profiles of the fetal brain, fetal liver, and finishing lamb brain post-EPA+DHA supplementation, and the supplementation’s effect on cognitive behavior of sheep. We hypothesized that EPA+DHA supplementation would result in higher concentration of EPA+DHA in fetal tissues, higher in the fetal brain than the fetal liver, and higher concentrations in the adult brain. We also hypothesized that EPA+DHA during both parts of development would improve the cognitive ability of the lambs. In experiment 1, twelve gestating ewes were fed 1.61 % (dry matter basis, DM) monounsaturated FA (MUFA) or EPA+DHA. At d 47 of gestation, fetal liver and brain tissue were collected via C-section for fatty acid analysis. In experiment 2, 64 ewes were fed the same diet as Experiment 1 for 50 d and 79 lambs were carried full term. At 60 d of age, lambs were weaned, separated into blocks based on body weight, and assigned to a MUFA or EPA+DHA supplemented diet (2x2 factorial design; the main effects were ewe and lamb supplementation). Weaned lambs were fed a finishing diet containing 1.5 % DM of MUFA or EPA+DHA. As a measure of cognitive ability, the lambs completed maze tests at d 48 and 50 post-weaning. Frontal lobe samples of the finished lambs were taken for fatty acid analysis at slaughter (d 56 post-weaning). Data were analyzed using a mixed procedure (SAS 9.4) considering the 2x2 factorial arrangement of treatments. Supplementation during early fetal development with EPA+DHA increased the concentration of DHA in the fetal tissues (P <0.01), and the liver had higher concentrations of EPA than the brain (P < 0.01), but no statistical significance between DHA (P=0.46). Supplementation increased PUFA and EPA+DHA concentrations in the finishing lamb brain (P < 0.01), but supplementation post-weaning did not affect EPA+DHA concentrations (P = 0.79). Solving the maze appeared to be associated with a maternal diet by finishing diet interaction, because lambs receiving a different diet during gestation than during post-weaning took less time to complete the maze on the second day compared to the first day (P < 0.02). These results suggest that both MUFA and EPA+DHA are needed for cognition, but that cognitive behavior is not associated with finishing lamb brain FA profiles.