The War At Home: Black Vietnam Veterans and their Organizing Techniques in the Context of the Black Power Era 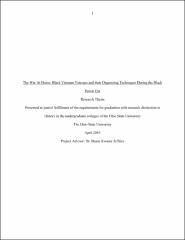 In this essay, I explore the ways that black Vietnam veterans made sense of and drew upon their experiences in Vietnam to become politically active in African American communities once they returned home from the war. I begin by looking at the reasons why black men were fighting the Vietnam War and what their experiences were like once they arrived there. I look at the different ways in which being a GI in Vietnam politicized black soldiers and the ways that they engaged in political activity while they were in country. I then explore how black veterans made sense of America once they returned home from Vietnam and how these understandings translated into political organizing. Then I look at the stereotypes of black Vietnam veterans by using media outlets like The New York Times and black periodicals such as Ebony Magazine to high the myths and misconceptions that enveloped GIs. The heart of the paper, though, examines the different political organizing techniques that black GIs used. Drawing heavily on interviews with black veterans, I unpack the different and unique ways that they engaged in political activity once they returned home. My research reveals that a majority of black veterans became politically engaged in a variety of ways and with varying degrees on involvement. Some veterans expressed their discontent by refusing to take part in riot control in urban black communities while others joined groups like the Black Panthers. Still others became involved in veterans’ affairs and community organizing, and while some became peace activists. The different forms of organizing that veterans participated in allowed them to help their communities in the ways that were necessary in order to obtain the freedom rights that African Americans were still being denied. Black veterans looked to political organizing to enhance and protect those communities with which they most closely identified, especially the black, veteran, and incarcerated communities. It was the work of black Vietnam veterans that helped to ensure that these communities were not forgotten in the aftermath of a war that everyone in America seemed eager to forget.