Jihad in the West: The Threat Posed by Salafist Terrorism to the United States and Western Europe 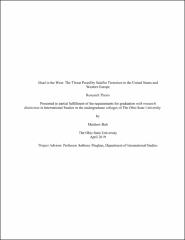 There are two main types of jihadi terrorism that have plagued the Western world in the post 9/11 era: Organized attacks planned by an established terrorist groups and homegrown attacks carried out by unaffiliated individuals. A fundamentalist interpretation of Islam known as Salafism is used as a starting point and inspiration for such organizations and individuals to commit jihadist violence against the West. Terrorist organizations that use a Salafist interpretation of Islam have had the largest presence in the post-9/11 world such as Al-Qaeda and their affiliates and the Islamic State and their affiliates. This project aims to find out the overall threat Salafist terrorism poses to the United States and Western Europe as well as the threat of each type of terrorism in these regions. Secondary sources ranging from subjects on Muslim immigration to Europe to common trends in attacks that have occurred on Western soil since 9/11 will be used extensively to accurately calculate the threat of each type of attack. The Global Terrorism Database will also be used to extract valuable data over target locations, types of weapons used, and casualties per attacks. In addition, primary sourced documents, such as Al-Qaeda’s Inspire, and the Islamic State’s Dabiq and Rumiyah dating from 2010-2017, will be analyzed to gain insight into the type of education being put out to radicalize and “train” lone actors to commit acts of terrorism. While the overall threat is small, but not negligible, Western Europe is shown to be under a far greater threat than that of the United States. Western Europe, due to a number of political and geographical reasons, is more at risk of organized group attacks than the United States while small, homegrown terrorism pose a greater threat to the United States. This research presents an accurate threat-assessment of two main types of attacks of Salafist terrorism in order to cut through political and media hyperbole and give future researchers and politicians a sound source and conclusion to create educated policy from.

Department of International Studies at the Ohio State University