Pilot Study: Equine Use of and Preference for Salt Blocks in Pastures and Wildlife Interaction 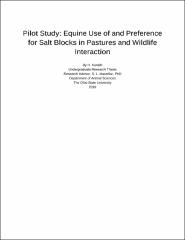 Salt blocks are often used by equine owners and can be used to attract wildlife. Consequently, there is potential for both horses and wildlife to be attracted to the same location. Additionally, horse owners anecdotally report horses prefer Himalayan salt. The objectives of this study were to determine equine and wildlife use of and preference for salt block types. Three types of salt blocks (plain white salt, red trace mineral, and Himalayan) were used in a randomized block design study. Blocks were randomized between type and location and changed every two weeks. Two pastures (S and N), where horses (n=67) are housed year-round, were used in the study. The S pasture horses were broodmares and young stock, while the N pasture horses were mixed lesson horses and broodmares. One motion-sensing camera, 2017 Browning Strike Force 850 HD, was affixed to a fence post to monitor all three salt blocks in each pasture. Cameras recorded 20 s minimum of video and had red glow infrared emitters to capture night activity. Species, salt pan choice, salt block choice, and duration of licking were recorded. The results reported are from a six-month study (August 2018-February 2019). Cameras were triggered 3438 and 6769 times in the S and N pastures, respectively. The camera triggers were caused by horses 95% and 98%; humans 2% and 1%; and wildlife 0.4% and 0.2% of the time in the S and N pastures, respectively. Wildlife spotted included raccoons, coyote, deer, groundhogs, fox, and birds. Only three incidences of wildlife (raccoons and a fox) visiting a white salt block was identified in the S pasture. Of the camera triggers, 71% (S) and 67% (N) of the time horses spent time licking mineral blocks. The majority of salt block licking occurred between 08:00 and 20:00 hours, and horses spent an average of 19 ± 11 s (average ± standard deviation) per visit licking a salt block. Statistics were conducted using Microsoft Excel. There were no differences in the average licking duration between the salt block types (P=0.47, ANOVA). Most horses (64%) were identified licking salt blocks at least ten times. Chi-square analyses indicate that 70% of these horses (52% of the total herd) demonstrated nonrandom pan selection (P<0.05). Pan choice may be influenced by other resource locations in the pasture. Negligible wildlife use of salt blocks, from August to February, indicates little risk of potential zoonotic disease transfer at mineral feeding stations. However, this pattern may change based on season.