From National to International Security: The Evolution of Sweden's Neutrality and Security Policy 1945 - Present 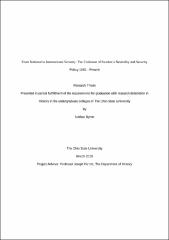 Sweden has remained a neutral power for the last two centuries. Swedish neutrality is rooted in two concepts, insecurity and morality. This neutrality was tested following the Second World War, for the East / West conflict that emerged challenged Swedish tradition. Sweden attempted to remain aloof from the two power blocs; however, with their insecurity on the rise, they began to display a Western lean to secure military technology and defensive cooperation. Once Swedish insecurity began to decrease, their morality took hold, and Sweden became a moral power following an active foreign policy. After the Cold War Sweden remained neutral; however, it became increasingly involved in multilateral peacekeeping efforts that appealed to their moral neutrality. This thesis explains the evolution of Sweden's neutrality during the Cold War by breaking Swedish neutrality into two core components, insecurity and morality, and applying these components to the various stages of Swedish neutrality.