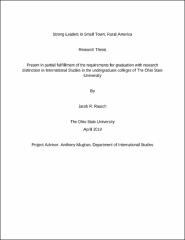 Purpose: To gain insight into how rural Americans perceive strong leadership and how those perceptions may have played a role in the 2016 U.S. presidential election. Methods: To gather data, 18 semi-structured interviews were conducted in New Philadelphia, Ohio, which asked rural Americans questions about President Vladimir Putin of Russia and his uses of strong leadership, to see how they perceived and reacted to it. Findings: The interviews produced three common themes among the majority of the participants: 1) They did not have very warm feelings for President Putin but still admired his achievements 2) While they admired his achievements they did not admire his methods and 3) They doubted his claims that Christian values informed his political decisions and actions. Implications: The results of the interviews show that Donald Trump’s promise of strong leadership during his campaign may have attracted rural voters and thus played a major role in him being elected in 2016, but that his methods as president may also lead to a decrease in his popularity amongst rural Americans in the 2020 U.S. presidential election.