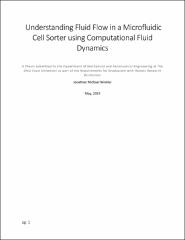 Cell sorters have been a key tool in several ground-breaking medical discoveries. Their ability to sort based on different parameters simultaneously has made them valuable tools used to study the Immune System, cancers, and other complex biology. The development of a sorter introduces several questions about how accurately the device can sort cells. In this thesis, we present computational fluid dynamics (CFD) studies to analyze pressure distributions and flow rates in a new microfluidic cell sorter. The cell sorter has an actuator that changes the widths of two channels after a Y-shaped bifurcation. The actuator is controlled using an electric potential which causes an electrostatic force. To control the electric potential, De-Ionized (DI) water must be used; to maintain cells’ viability, cell solution is required. These fluids must be kept in their specific channels for the sorter to operate. The small scale of the microfluidic cell sorter makes it impossible to experimentally determine pressure and velocity at several key locations in the sorter without extensive modifications to its typical operation. However, the use of CFD allows analysis of the entire fluid domain. Further, the cost and time required to make prototypes makes computational methods a desirable alternative. To understand the fluid domain in the microfluidic cell sorter, we studied two main questions: how the DI water mixes with the cell solution, and how the sorting action impacts the pressure gradients and streamlines of the fluid. Examining the Pressure gradients and streamlines of two fluids in the sorter revealed that the fluids interaction would prevent the sorter from operating without reducing the survivability of cells in the sorter.