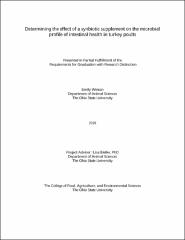 An Eimeria challenge may lead to coccidiosis causing morbidity and mortality, with a subclinical infection of coccidiosis causing reduced feed conversion, and reduced production. Eimeria is estimated to cost the United States $3 billion in total damages. Despite the severity of consequences and damages Eimeria causes, there are currently no great options for control and prevention. The object of this trial is to determine the effect of a synbiotic feed supplement on the performance, microbial profile, and parameters of intestinal health of turkey poults that will be subjected to mixed Eimeria challenge. On day of hatch (dOH), the treatments challenged with Salmonella enterica Enteritidis (4x104 CFU/poult) were challenged, non-nonmedicated (CNM), challenged, synbiotic supplemented (CSS), challenged, and Clinacox (1 PPM) medicated (CCM). On d16, the CNM, CSS, and CCM treatment groups were challenged with a mix of Eimeria adenoeides and Eimeria meleagrimitis. The treatments groups consisting of non-challenged, non-medicated (NCNM), non-challenged, synbiotic supplemented (NCSS), and Non-challenged, Clinacox (1 PPM) medicated (NCCM) did not receive doses of either challenge. On d21 and d28, five poults from pen (n=30 poults per group) were euthanized and lesion scored for Eimeria. Gastrointestinal tract (GIT) samples were collected at d21 and d28 for qPCR analysis. qPCR data was analyzed via Oneway Analysis of Variance (ANOVA) using the JMP Pro13 Software (JMP Software, SAS Inc., 2018) and significant differences between groups were compared via Student’s t-test (p ≤0.05). No samples from either d21 or d28 had a detectable level of Salmonella present. On d21, there was a higher fold change of the Firmicutes population in all treatment groups compared to NCNM. On d28, the synbiotic supplemental treatment groups had the highest increases for Firmicutes, while CSS had the largest increase with significant difference (p ≤0.05) between CSS and CNM. On d21, among all groups relative to the NCNM there were reductions in the Lactobacillales (LAB) order. With the Lactobacillus genus on d21 and d28, there was a reduction among all groups relative to NCNM. Reductions among all groups occurred for the Bifidobacterium genus relative to NCNM. On d28, the reductions became fold increases among all groups except for CNM. For the d21 and d28 APEC analysis, there were significant differences between groups observed. These results suggest that the synbiotic supplement altered the microbial profile in turkey poults.