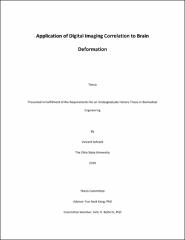 Shear deformation and strain are important to be quantified to evaluate computational models of the brain; however, it is challenging to get measurements at the meningeal layer. Strain gauges can be attached to hard tissues, such as bone, but cannot be attached to soft tissue, such as the brain. This study proposes using Digital Imaging Correlation (DIC) to analyze high-speed, high-frequency, B-mode ultrasound images to track the displacement and strain of a postmortem human subject (PMHS) brain tissue during anterior/poster motions that would be likely to cause a subdural hematoma. DIC makes it possible to calculate strain and displacement by looking at how points move across a series of images taken over time. Current commercial point-tracking software, such as TEMA which is used in Injury Biomechanics, typically only tracks points rather than performing a strain analysis. The head was placed in a device that generated rotational motion. The PMHS head was tested under high, medium, and low severities. A subset size of 20, a subset spacing of 3, and a strain radius of 3 were used to analyze the medium severity ultrasound images with DIC. The DIC parameters were supported by a parametric study that used images of a metal sample in tension. Both displacement plots and strain plots were created from the analysis. The maximum x displacement measurements at different depths were validated with TEMA. The percent difference of the displacement measurements between the two methods was 2.22% at 1 mm deep and 2.24% at 2 mm deep into the brain tissue. At the surface of the brain tissue, the percent difference was 32%. The strain plots were less conclusive due to a large quantity of noise. It was concluded that DIC can accurately measure displacement but not strain from ultrasound images of the brain.