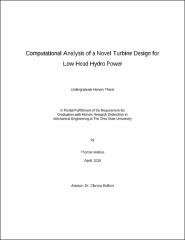 A critical consideration in the design of hydro turbines is their energy conversion efficiency. Most conventional hydro turbines operate with efficiencies up to 90%, but usually require large heads (up to 27 meters), and large flow raters to operate efficiently. Thus, conventional turbines are not a viable solution for low head hydropower applications such as small dams or “weirs,” which are around 5 meters tall or less. This study presents a numerical investigation of a novel cross-flow turbine called the William’s cross-flow turbine, which is designed specifically for use in low head hydro power. The numerical simulations employ Reynolds Averaged Navier Stokes Equations, using the Volume of Fluid (VOF) method to model two phase flow through the turbine. The main set of simulations model flow over a low-head weir and through the turbine. These simulations model the transient effects due to blade rotation, and are used to predict the turbine efficiency. Result showed that device operated consistently with an energy conversion efficiency of around 50%. Design iterations were carried out with focus on blade geometry. Results showed that a traditional “Ossberger” style cross-flow turbine blade outperformed the novel blade design that was initially proposed. The flow field results illustrate that the turbine nozzle was not effective at guiding the flow through the turbine, which resulted in performance reduction for both of the blade designs that were tested.