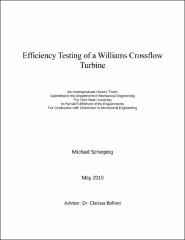 In 2016, renewable energy made up only 10% of total U.S. energy production, with hydropower making up a quarter of that 10%. As large rivers have been mostly developed, the market for expansion of renewable energy through hydropower must now look to the smaller rivers. There are over 80,000 small dams spread throughout the United States that have the potential to be used for renewable energy production. Many of these rivers contain low-head dams or weirs that are not yet used for hydropower production. This project’s purpose is to evaluate low head hydro turbines that can be easily installed in different rivers without changes to the dam or weir. This project focused on the turbine design, in particular, blade shape, as well as a comparative study of the turbine operating in conjunction with a debris screen. An initial prototype turbine was built by Central State University, which was modified for this project. The testing involved parametric analyses to determine the optimal operating conditions and design parameters yielding the highest turbine efficiency. The first half of the project was dedicated to maintaining turbine rotation, belt driven gear alignment, data recording techniques, and flow input into the turbine. The second half focused on generating power curves and evaluate the performance under debris screen condition. With increased development and installation of low head turbines in the available market, these turbines could increase renewable energy production by 2.5%.