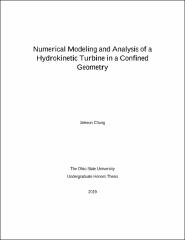 As a renewable and reliable source of energy, hydropower provides around 17% of the electricity production in United States. Hydropower takes on many forms and the most common method of them is using a potential energy through a dam which typically involves large construction costs. Compared to this conventional form of hydro power generation, the use of hydrokinetic power doesn’t require large civil engineering works since hydrokinetic turbines can be installed with no or small modifications to existing infrastructure, but they are not yet widely employed due to operating in lower energy density resource. Research of utilizing hydrokinetic energy are mainly focused on large applications such as a tidal power, rather than small scale river applications such as discussed in this study. While the power output of a small hydrokinetic turbine for river or canal application will typically be in the micro or pico-power range, there is a case to be made for the installation of such devices when designed cost efficiently. The main objective of this research is the development of a three-dimensional Computational Fluid Dynamic (CFD) model of a hydrokinetic turbine by using Finite Volume Method (FVM). Ansys FLUENT19.1 was employed in order to analyze the Smart Free-Stream turbine designed by Smart Hydro Power GmbH in a canal setting. The flow field as well as the power output of the turbine were analyzed for various water velocities and rotational speeds. The results were then compared to measured values provided by the turbine manufacturer. The goal is to be able to provide accurate power predictions from CFD modeling to evaluate the cost and efficiency of more complex scenarios (i.e. Multiple turbines in complex canal geometries) in advance to committing to such installation projects.