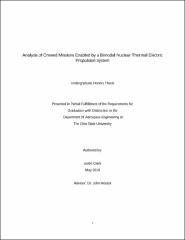 From bone decay, to radiation exposure and muscle atrophy, long duration spaceflight poses significant health risks to humans. Technologies and practices have been developed that limit the impacts of some of these health issues, but perhaps the simplest method would be one of avoidance. Reducing mission durations through nuclear propulsion technologies has been researched since the 1950s, when NASA’s NERVA program tested various nuclear thermal engines for crewed applications. The technology showed significant promise but fell by the wayside due to political and environmental reasons. However, interest in nuclear thermal propulsion (NTP) has been renewed as of late, with NASA’s Marshall Space Flight Center and private companies such as BWX Technologies developing a new cryogenic NTP system for use with crewed Mars missions, possibly reducing one-way trip times from 6 months to 4 months. And while this would be a significant improvement, it’s possible that a standalone NTP system doesn’t meet the full potential of a nuclear fission powered spacecraft. Instead, a combined nuclear thermal and nuclear electric propulsion (NEP) system, also known as a bimodal nuclear propulsion system, could prove to be more efficient, and offer shorter mission times than just a single NTP system. A spacecraft with a bimodal nuclear propulsion system would have a single nuclear reactor and the capability to switch between both modes, altering the heat output of the reactor based on the required propulsion system. The NTP system would offer high thrust and an ISP in the 900s, and would be useful for escaping the sphere of influence of a planet. The NEP system, on the other hand, would offer very low thrust, but would provide long periods of propulsion in interplanetary space, as well as an ISP in the 5000s. In this paper, mission opportunities gained by a combined NTP/NEP system will be explored. Specifically, trajectories of crewed missions to orbit Mars and Jupiter using such a system will be analyzed, with the intent to minimize overall mission time. Fuel and payload weight calculations will also be performed to ensure that the delta-v budgets for these missions are adhered to. Some focus on the design of the reactor/propulsion system will also be given, and the overall performance and benefit relative to chemical and standalone NTP powered craft will be presented.

Accepted and presented at the 69th International Astronautical Congress