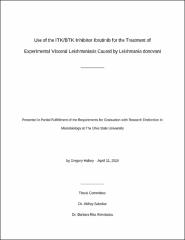 Leishmaniasis comprises a group of diseases caused by protozoa of the genus Leishmania that are transmitted via the bite of female phlebotomine sand-flies. Infections may be cutaneous or visceral depending on the species, however, visceral leishmaniasis (VL) is significantly more deadly than cutaneous leishmaniasis (CL). Leishmaniasis is present in nearly 100 countries with approximately 200,000 to 500,000 new cases annually for visceral infections, about 50,000 of which are fatal. VL has a mortality rate of roughly 75 to 95% given no treatment and 5 to 10% with standard treatment pentavalent antimonials (SbV) such as sodium stibogluconate (SSG) which are toxic and require prolonged intra-peritoneal or intravenous administration leading to incomplete treatment regimes. Furthermore, the widespread use of antimonials has led to a rampant increase in the prevalence of drug resistant parasites. Ibrutinib is an anticancer drug which has been shown to modify immune cell responses and has previously shown effectiveness against CL. In this study, we sought to evaluate oral treatment with ibrutinib as a host-directed therapy for VL caused by Leishmania donovani using mouse models of infection. Oral ibrutinib treatment resulted in significantly reduced liver and spleen parasite burden as compared to SSG and vehicle solution controls with greater numbers of mature liver granulomas. Ibrutinib-treated mice had a reduced influx of Ly6Chi inflammatory monocytes, known to cause susceptibility to L. donovani and treatment was also associated with the release of protective cytokines in the liver and spleen: IFN-γ, tumor necrosis factor α, IL-4, and IL-13. No changes were noted in B cell populations or IgG levels indicative of a B cell independent mechanism. Our results demonstrate oral ibrutinib is substantially more effective than SSG (70 mg/kg) in reducing parasite burden L. donovani and acts through alteration of host immunity, therefore, ibrutinib has potential as an immunomodulatory treatment for VL.