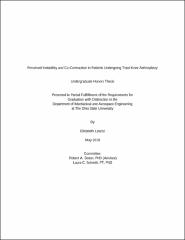 Osteoarthritis (OA) is a disease characterized by the breakdown of cartilage in a joint. It is most common in the knee joint, with 14 million Americans experiencing knee OA in the United States alone. Patients with knee OA often report pain, stiffness, and instability that affects their daily lives. These patients often utilize an involuntary muscle activation strategy in their lower extremity known as co-contraction, in which agonist and antagonist muscles activate simultaneously. This strategy may increase the perception of stability in the knee, but it also increases the load on the joint. Total knee arthroplasty (TKA) is the most common treatment for advanced knee OA, with over 600,000 primary TKAs performed in the United States each year. While TKA has been proven to decrease pain, increase knee range-of-motion, and improve patient function, many patients still exhibit elevated co-contraction levels and report instability after surgery. This instability may be due to insufficient support from passive and active stabilizers in the knee. To improve patients’ TKA outcomes, it is important to relate measurable variables before, during, and after surgery to post-operative measures of function. The purpose of this research is to understand how co-contraction is related to patient function, and to determine how the perception of instability is related to surgical technique and other variables before and after surgery. Forty-three patients awaiting TKA provided IRB-approved written consent as part of larger project in the Neuromuscular Biomechanics Lab. Data were collected on each patient’s kinematics and muscle activation patterns during gait, as well as each patient’s strength, perception of instability, and function before, 6 months after, and 2 years after TKA. Function was measured by performance on clinical tests (Six Minute Walk Test, Stair-Climbing Test, Timed Up-and-Go Test) and by patients’ responses to clinically-administered surveys (Knee Injury and Osteoarthritis Outcome Score, Short-Form Health Survey). During surgery, the orthopaedic surgeon measured passive knee laxity and balance using custom instrumentation. These measurements were used as a metric for surgical technique. Greater perceived instability was related to higher co-contraction and weaker muscles before TKA. Co-contraction was not significantly associated with patient function. Higher co-contraction was associated with weaker muscles across all time points. Knee laxity and balance were not strongly related to co-contraction. Future studies should investigate the effects of strength training programs on perceived instability in patients with OA. The relationship between co-contraction, strength, and function should be studied further. A larger study should be done to investigate the effects of knee balance and laxity on co-contraction after surgery.