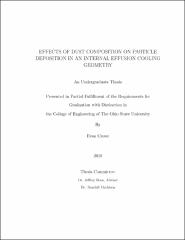 In this study the effects of dust composition on particle deposition in an effusion cooling geometry were investigated through a series of experiments. Single mineral dusts made from five different minerals, Quartz, Dolomite, Albite, Salt, and Gypsum, were milled to similar size distributions (approx. 0-10μm diameter). These dusts were then used in particle deposition tests on a flat plate effusion hole test article which was heated in a kiln to 1116K and supplied with coolant flow heated to 950K. Percent mass flow reduction per gram and deposit morphology were recorded for each test. Results for the different minerals varied greatly ranging from 7.8% to 160% reduction in mass flow per gram injected, with the albite dust producing the greatest blockage. The different dusts also produced varying shapes of deposits. These five dusts were then combined to form a dust blend with the same mass fractions found in AFRL02, a commercially available test dust, and additional tests were conducted using this dust. Results from the tests using the OSU mixed AFRL02 were compared with an estimated blockage per gram found by taking a weighted average of the blockage per gram for each single mineral dust on a percent volume basis. When tested, the mixed AFRL02 produced a lower blockage per gram than the estimate, indicating that an estimate based on volume fraction alone is not sufficient to predict the deposition of dusts composed of a mixture of minerals.