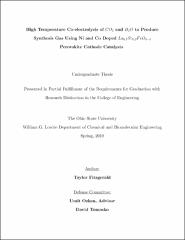 The increasing atmospheric CO2 concentration and depletion of fossil fuel resources has spurred research into cleaner fuel alternatives. High temperature co-electrolysis of CO2 and steam to produce synthesis gas (H2+CO) in a solid oxide electrolysis cell (SOEC) could address both these issues. Synthesis gas may be used directly as a fuel or as a raw material in Fischer Tropsch Synthesis plants to produce liquid hydrocarbons. Power obtained from renewable sources must be utilized for this process to be viable. In this study, lanthanum strontium ferrite -type cathode catalysts with perovskite crystal structure were explored due to their high electronic and ionic conductivity and suitable thermal stability. Doping the Fe-site with Ni and Co led to modification of the physical and electrochemical properties. X-ray diffraction showed that both doped and undoped lanthanum strontium ferrite catalysts have orthorhombic perovskite structure, and electronic conductivity studies concluded that Ni and Co doped lanthanum strontium ferrite perovskite catalysts have higher conductivity than undoped catalysts. Oxygen mobility for doped catalysts were higher than the undoped, which indicates that doping improves ionic conductivity. Electrochemical activity tests showed that doping the Fe-site with Co reduces the faradaic efficiency for synthesis gas production, whereas doping with either Ni or both Ni and Co improves the faradaic efficiency to 100%. The H2/CO ratio in the produced syngas was found to be a function of Ni/Co ratio in the perovskite. Following electrolysis testing temperature-programmed oxidation was conducted on the cells which showed that coke formation occurred on the Co doped sample which may be the reason behind the observed lower faradaic efficiency. In conclusion, SOEC is a promising technology to convert CO2 to value added chemicals and addresses the issues of increasing CO2 emissions and depleting fossil fuel resources.