Gentrification Without the Negative: A Rhetorical Analysis of the Franklinton Neighborhood 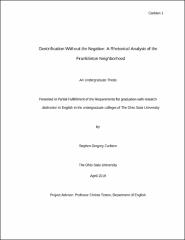 Numerous disciplines have engaged gentrification, a phenomenon whereby urban neighborhoods experience dramatic changes to their social fabric, since sociologist Ruth Glass introduced the term in 1964. Whether contesting the realities of displacement or how institutional or market forces drive the phenomenon, little scholarly consensus has been reached over the topic. By studying the ground-level gentrification at work in Franklinton, a neighborhood in Ohio's capitol city, I mobilize rhetorical theory to analyze how gentrification discourses affectively negotiate its perceived damages and benefits. My analysis focuses on planning documents published by the Columbus Department of Development from 1992 to 2014, as well as local news and media sources. I conclude that Franklinton's gentrification embodies how nonfixed, temporally situated rhetoric effects urban policy at the local level.