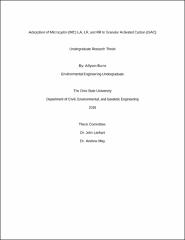 Microcystins (MCs) are a class of cyanotoxins produced by cyanobacteria found in harmful algal blooms. MCs are hepatotoxins and possible tumor promoters, so removing them during drinking water treatment is essential. There are many different strains of microcystins, but I chose to look at MCLA, MCLR, and MCRR because they are commonly seen in surface waters across Ohio. Conventional methods have proven to be ineffective in removing these toxins in drinking water treatment, thus requiring the efficacy of alternative methods, such as the use of granular activated carbon (GAC), to be evaluated. Because the properties of different MC strains vary, I hypothesized that their adsorption to activated carbon would differ. Specifically, it was expected that MCRR would adsorb the best since it is neutrally charged; since MCLA and MCLR are both negatively charged, they were expected to have lower adsorption capacities as they would experience more electrostatic repulsion from the negatively-charged GAC. To determine the ability of activated carbon to adsorb MCs, equilibrium batch tests were performed with granular activated carbon and three different strains of microcystin. Both individual and competitive batch tests were done with these toxins in order to observe their behavior on their own as well as in a competitive, more realistic environment. The tests used a “model water” (MW) which imitated the properties of Ohio surface water. The data obtained was then fit to the Langmuir isotherm model. The results indicated that MCLA adsorbs the best to GAC in independent tests. MCLA had an adsorption capacity around 8.5 micrograms of toxin per milligram of GAC in individual tests, while MCRR had a capacity closer to 4μg/mg. MCLR had the lowest capacity with values slightly less than 4μg/mg. This conflicts with the expected result that MCRR would have the highest adsorption capacity, potentially indicating that adsorption to GAC is more complex than the charge of the toxin. During competitive tests, MCRR had the highest adsorption capacity, followed by MCLA then MCLR. This followed my original hypothesis, which indicates that charge may play a larger role in GAC adsorption during competitive tests. In conclusion, when removing microcystin during drinking water treatment, it is essential to know what strains of the toxin are present. MCLA will require less GAC to remove enough toxin to comply with EPA standards than MCRR or MCLR when it is not competing for adsorption sites with other MCs.