The Psychology of Distracted Driving and Working Toward Reducing Driver Distraction 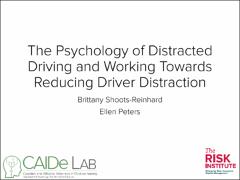 Distracted driving (DD) is a leading contributor to motor vehicle accidents, and is estimated to causing thousands of deaths and hundreds of thousands of injuries per year in the United States. With support from the Risk Institute and reps from insurance, automakers, and educators, we conducted two surveys of U.S. drivers to study the psychological underpinnings of DD. We considered a number of possible causes including: 1) underestimation of DD risks, 2) affective reactions to causes and consequences of DD, 3) motivated denial of DD risks, 4) overconfidence in driving ability, and 5) perceived acceptability of DD. We also examined support for a variety of methods of distraction reduction and began investigating ways to increase support for distraction mitigation. Across two surveys, we recruited 1,034 (Survey 1: N=386, 49.5 percent male, 82.6 percent white; Survey 2: N=648, 49.5 percent male, 77.7 percent white) American drivers using Amazon Mechanical Turk. Participants self-reported the percentage of trips on which they were distracted by a variety of technology and used cell phones in a variety of situations. Then, they provided risk perceptions, perceived prevalence of DD in others, attitudes and attachment to cell phones, the extent to which people thought they were less likely to get in a DD-related crash than others (i.e., overconfidence), attitudes toward mitigation strategies that involved education, insurance discounts, enforcement/fines, organizational measures, and technology (e.g., apps, bluetooth, etc.), and in the second survey, a measure of motivated denial of DD risks. Only one-third of participants reported that they never use their phone while their car is in motion. People who drive distracted think many other people drive distracted, are overconfident in their ability, think DD is NOT risky, see more benefits to using phone and driving, are attached to their phones, and are highly reactive to attempts to change them. These psychological predictors reduced or eliminated influence of being younger or male. People tended to support education and insurance discounts to reduce distraction and were less in favor of in-car technology or apps that would take control of their tech use away from them (e.g., apps that don’t allow responding to messages). Distracted drivers, those who perceive less risk of distraction, and the overconfident supported mitigation more. Support was increased for insurance discounts framed as "charging good drivers less" vs. "charging bad drivers more," for apps framed as "help you not use phone" vs. "prevent you from using phone" and laws framed as "fines" vs. "bans." In Survey 2, our new measure of message reactance was related to DD, greater perceived ability to do so, lower risk perceptions and greater benefit perceptions of DD, being young and male, and lower attitudes toward distraction reduction. In the future, we will continue collaborating with stakeholders (e.g., ODOT) to develop or test evidence-based campaigns to reduce DD.
AUTHOR AFFILIATION: Brittany Shoots-Reinhard, research associate, Ohio State Department of Psychology, shoots-reinhard.1@osu.edu (Corresponding Author); Ellen Peters, professor, general internal medicine, Ohio State College of Medicine