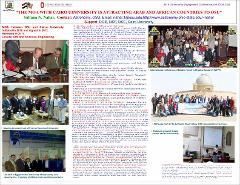 The MOA between Ohio State and Cairo University has benefitted students and researchers, particularly from Egypt, via joint collaborative projects. My annual delivery of an atomic astrophysics course attracts many from various institutions in Egypt. Ohio State publicity has added more when I give seminar and conference presentations in Egypt. I received the Guest of Honor status at the international Arab conference on Astronomy and Geophysics. My lectures at the International School of Young Astronomers have had a great impression of Ohio State to the students. A global gateway office would be helpful.

Since the establishment of the MOA (Memorandum of Agreement), signed in 2012 and renewed in 2017, with Cairo University in Egypt, students, researchers and faculty members in the Arab and African countries are becoming more attracted to Ohio State. Under the MOA research exchange was held between Cairo University and Ohio State departments of Astronomy, Physics, Engineering, Mathematics, Center of Middle East, and my annual deliverance of the atomic astrophysics course with computational workshops attended by a number of Egyptian institutions initiated in 2013. During my teaching, I am also invited to give seminars to other institutions and to the conferences organized in Egypt. Ohio State was highly publicized as I gave a presentation on spectroscopy of exo-planets and became the first female guest of honor at the international Arab Conference on Astronomy and Geophysics held in Egypt in 2016. Participants from Saudi Arabia, Algeria, Malaysia explored a long-term connection with Ohio State. All these have resulted in an extensive familiarity of Ohio State in Egyptian institutions and increased number of student and research training applications to Ohio State. Cairo University is one of the most highly regarded degree-giving institutions for the governments of Arab and African countries, such as Oman, Syria, Palestine, Iraq, Yemen, Sudan, Nigeria, Ghana, etc. The participation of these countries in common programs with me has increased the popularity for Ohio State considerably. Although often their educational standard does not meet that of Ohio State, they all express some connection for joint collaborative projects. The 41st International School of Young Astronomers 2018 of International Astronomical Union was held in Egypt where the best postgraduate students from Egypt, Tanzania, Sudan, Ethiopia, Madagascar, Rwanda, Nigeria, Ghana, and Nepal participated. I joined the school as an international lecturer along with other members from Mexico, United States, Russia, Algeria, China, Egypt, Spain, and Norway. Ohio State made a permanent impression on the young minds. I took some World Water Day T-shirts from Ohio State celebration for distribution. A happy Madagascar student told me he is saving his T-shirt to put on with special attachment in his country. The students keep contact with me with the aim to apply to Ohio State for their Ph.D. degree. With the objective of global impact by the Ohio State OIA, opening a Global Gateway Office for the Arab and African countries in Egypt can benefit many students and researchers.
AUTHOR AFFILIATION: Sultana Nahar, research professor, Ohio State affiliation, nahar.1@osu.edu (Corresponding Author)