Engaging Cleveland's Most Vulnerable Communities in Climate Action and Resilience 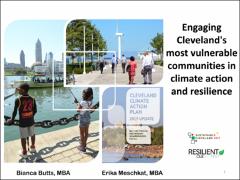 Cleveland is truly a city of neighborhoods, so to create the foundation for lasting climate action, implementation must occur at the neighborhood level. The heart of this presentation is sharing about half-day workshops hosted in 12 neighborhoods previously under-represented in sustainability. Our Learn More, Say More, Do More climate workshop series (12 workshops held in 12 different Cleveland neighborhoods) sessions created spaces where facilitators and participants alike represented Cleveland's diverse population and worked together to identify neighborhood priorities for action. In addition to the neighborhood sessions, our engagement strategy included a Climate Action Advisory Committee with 90+ members and creating pathways to neighborhood-based action by leveraging the ioby crowd-sourcing platform and matching funds from the Cleveland Climate Action Fund.

Given the reduced prospects for support from the state and national level on climate and equity, local action is more important now than ever. While the 2013 climate action plan built some momentum in Cleveland, benefits are not being felt equitably. Compounding that, climate change almost always impacts lower-income communities and communities of color more negatively. New research since 2013 illustrates how climate change exacerbates many existing challenges in Cleveland: Income: While Cleveland's total wealth has increased since the Great Recession, incomes for low-income households has stagnated. Public transit and jobs: Only 26 percent of Cleveland's metropolitan population can access a typical job via public transit in less than 90 minutes. Trees: Select neighborhoods have close to 40 percent tree canopy, while others are as low as 4 percent. Cleveland's overall canopy sits at 19 percent, well below most major U.S. cities. Heat: Each year in the United States, more people die from heat waves than from any other type of natural disaster. In Cleveland, nearly half of homes do not have air-conditioning, making this threat even more severe, especially among the elderly, the poor, and other vulnerable populations. Lack of trees and high levels of pavement make residents in some neighborhoods even more vulnerable. Air quality: While improving in recent years, Cleveland still has some of the worst air quality in the United States because of high levels of ground-level ozone and fine particulates, leading to high asthma rates. Water quality: In the last 50 years, the amount of rain in Cleveland has increased by 26 percent, the amount of heavy rain storms increased by 22 percent, and there are 20 less freeze-free days per year in Lake Erie on average. These trends, each projected to worsen, pose flooding and water quality challenges for Clevelanders. While these types of numbers are not unique to Cleveland, they are amplified in a rust belt city on the rebound that still has more than half of its children living in poverty. To engage the community in developing a more equitable climate action plan, the heart of this presentation will focus on workshops in 12 different neighborhoods previously under-represented in sustainability, where facilitators and participants alike represented Cleveland's diverse population and worked together to identify neighborhood priorities for action. To date, the city and partners held more than 20 community meetings and engaged more than 450 individuals in the 2018 Climate Action Plan Update process. This includes 90+ Climate Action Advisory Committee members (with resident climate ambassadors) and approximately 300 more residents through our Learn More, Say More, Do More climate workshop series. As a result of this series, more than 40 neighborhood projects were developed through the ioby crowd-sourcing platform, and 22 were supported by $50,000 in matching fund from the Cleveland Climate Action Fund.
AUTHOR AFFILIATION: Erika Meschkat, sustainability manager, City of Cleveland, Mayor's Office of Sustainability, emeschkat@city.cleveland.oh.us (Corresponding Author); Bianca Butts, lead consultant, NIA Consulting, LLC